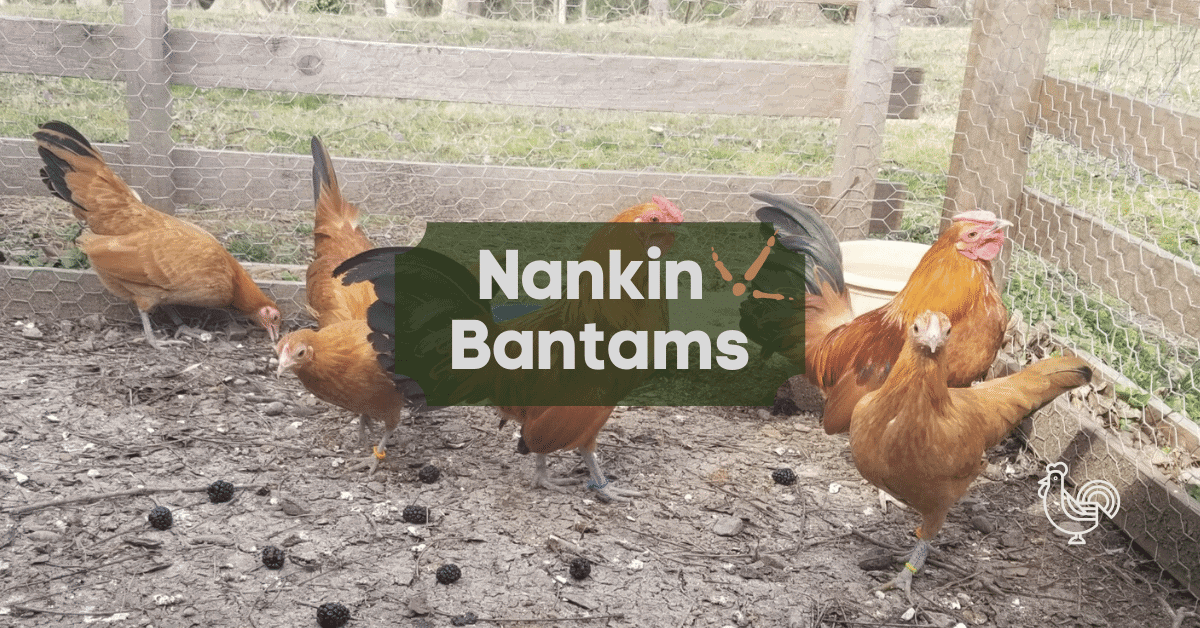 One of my most beloved breeds is the beautiful reddish bantam known as the Nankin.

The Nankin is one of the oldest bantams known to man, and it is a true bantam, meaning it has a no larger counterpart to which it was derived.

Nankin’s come in two comb varieties, straight and rose. I personally have the rosecombs.

Nankins are small, weighing only 20 to 24 ounces, they are slow to mature, laying cream to light beige eggs that are small and round, plus the hens are noted for being exceptional sitters.

The Nankin is as ancient as it is rare, with less than 600 of them in the United States, the Livestock Conservancy has them listed as critically endangered. This bird is thought to have arrived in England before the 1500s, some say it is an Asian breed, but in actuality, it is from Britain. Were it not for a handful of devoted breeders, and this incredible bird would have met extinction years ago.

This breed has gone by a few names, originally known as the Yellow Bantam in 17th century Britain. Then called Nankeen, named after a ginger-yellow colored cotton made in China or possibly India, or the name could have come from the French word for ‘dwarf,’ which is “Nain” and the suffix is “kin,” which I think is a great name origin, some say it was also called the Nanking. Still, we may never know the truth of the matter.

The decline of the breed’s popularity started in the 1800s when the world was swept up in “hen-fever” and started seeking more colorful and exotic breeds.

The Nankin Bantam played a direct role in the creation of the Sebright bantam breed along with other well-known bantams.

The saving grace for the Nankin breed during hen-fever was how well the broody hens hatched eggs for different breeds and species, they are superior at the job.

The Nankin hens are known for being beautiful brooders and mothers, they are very devoted to their eggs and young.

The breeder I purchased my very first Nankins from, said that the birds were used on ship voyages. This was because of their small size, ease of handling, and gentle nature; it was stated that the little hens would climb between crates and barrels to lay eggs and was never bothered by living at sea in confinement.

These lovable bantams can handle confinement very well but can also be free ranged, yet they do not wander far and stay in tightly knitted family flocks, which is believed to be a defense mechanism. Nankins are not flighty like most bantams of this type, they are very calm and gentle. Even the roosters are known for being gentle and mild, but will quickly run to the aid of a hen crying out in distress.

The roosters are exceptionally watchful and aware of their surroundings, often warning the flock of a passing crow, a neighborhood cat, or anything out of the ordinary; I have watched my flock scatter and hide at the warning sound given by the rooster.

Due to their small size, they have retained the ability to fly, they love roosting high off the ground if given a chance.

Because of their size and the straight comb variety, they are not well suited for colder climates, as they can easily become frostbitten or succumb to the elements. Don’t get me wrong, these bantams are sturdy even being so small!

With a limited gene pool and their small round eggs, it is noted that hatching can be difficult when hatching artificially with an incubator, they do better when incubated by a hen.

Even with these struggles, the breed is a joy to raise, and the chicks that hatch are typically very hardy and thrive.

I have had mixed results when using incubators, my personal best artificial hatch was with a Harris Farms Nurture Right 360 -there will be an incubating and hatching article, stay tuned!

The Future of the Nankin Bantams

This breed was entered in the American Poultry Association Standard of Perfection in 2012, it is a recognized breed by the American Bantam Association and there is The Nankin Club of America, established in 2006.

I highly recommend visiting The Livestock Conservancy website for breeder information, individual breed profiles and to support their mission for our heritage breeds.

Check out these resources below-

There is a book devoted to this breed: The Nankin Bantam: A Rare and Ancient Fowl by Mark A. Fields, it can be found on Amazon Kindle here

“Diminutive in size but large in spirit, for over 150 years the Nankin bantam has been poised on the brink of extinction. To many, it may seem remarkable that this rare and ancient fowl still exists at all. But those few committed stewards who have cared for the breed through the ages have known first-hand that the stranger contemplation is that the breed ever became rare at all.” -Mark A Fields, The Nankin Bantam: A Rare and Ancient Fowl

Nankin Bantams are birds worthy of fighting for. They are full of history, have wonderful personalities, they are sturdy, wonderful mothers, and they are simply a joy to raise!

I have some that come up to the edge of the coop and let me scratch under their beaks or rub their heads through the fence. They jump up on my back to have a sit or take a ride.

Nankins are truly rich in history and are a truly rare species. Nankin Bantams are chickens full of antiquity and they are a real treasure to add your farmyard or homestead, you will not be disappointed!

If you have any questions about this wonderful backyard bird please reach out to us hello(a)ohcluck.com

Thank you for reading our article, if you liked it share it with a friend so we can spread the love of this amazing creature.

OhCluck.com is a participant in the Amazon Services LLC Associates Program, an affiliate advertising program designed to provide a means for sites to earn advertising fees by advertising and linking to Amazon.com

I've been raising chickens for as long as I can remember. Love the farm life, and my family.

link to The Great Debate: Americana vs Ameraucana?

These names have been confused for years and the confusion is more than just spelling, it is a mixed breed bird VS a true breed bird! It is easy to see why if you are new to chickens (or not), that...

If you keep a flock, I guarantee predators are lurking and watching your coop! No matter where you live - rural, urban, or somewhere in-between, something is licking its chops hoping for a free...

We Love to Raise Happy Chickens! Our goal is to grow our knowledge and yours. If you ever have a question you want to know about raising chickens just ask us. We are here to help you.

Your password reset link appears to be invalid or expired.